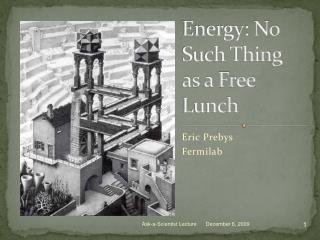 Energy: No Such Thing as a Free Lunch. Eric Prebys Fermilab. First: some acknowledgements. Donna Askins This originally started as a proposed guest lecture for a class she was going to give at a local community college Prof. Janet Conrad “Speech is the most important thing we have. It makes us a person and not a thing. No one should ever have to be a

Do the Right Thing: Keep it Clean and Promote School Pride by Going Green! Part One - . chevron’s power of student

Thermodynamics - . ch 12 - 15. thermal energy. internal energy of a system (kinetic energy of the particles that make up

Energy and Enzymes - . energy in living systems. energy is the capacity to perform work energy can be converted from one