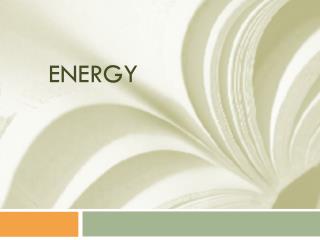 0. Energy. Energy. 0. Energy (E) is the ability to do work. Many types, but we can say 3 main types: Radiant Potential Kinetic. US Energy Consumption by Source. 0. Radiant Energy . Light Energy Visible and Invisible Travels in waves over distances Electromagnetic waves