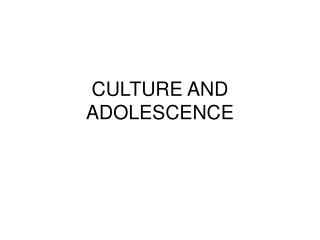 CULTURE AND ADOLESCENCE. Culture. The behavior patterns, beliefs, and all other products of a particular group of people that are passed on from generation to generation. Two important dimensions of culture in adolescents’ lives:

Creating a Safety Culture - How does one create a “safety culture” in the laboratory? start by making safe science as