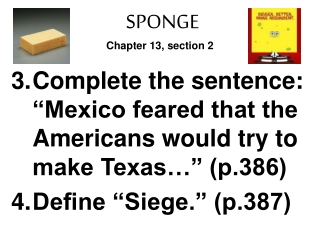 SPONGE Activities - . basis behind sponge activities. the term originated from madeline hunter philosophy that there

The amazing sponge! (Why do they matter?) - . fun facts. sponges can trap 90 percent of all bacteria in the water they

Sponge: Please answer the following question - . review from last class: describe the role of media in a totalitarian

Sponge #1 8-13-12 - . if scientists search other planets for possible life, they are likely to focus on the presence of

SPONGE 4 - . what is the difference between incomplete dominance and codominance ? (7.2) give an example of each. in

Sponge bob and friends - . by ryan giliam. hi my name is sponge bob. i live in a peach it is very wide and i work at the