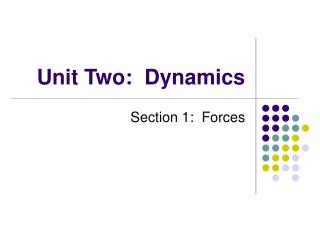 Unit Two: Dynamics. Section 1: Forces. Look in glossary of book …. What is the difference between dynamics and kinematics? What is a force? What can a force do? What causes a force? Key Terms: Dynamics Kinematics Force Gravitational Force Strong Nuclear Force Inertia Net Force