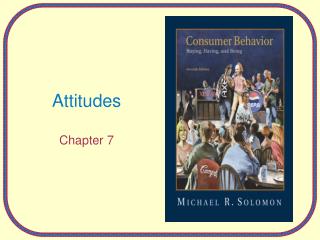 Attitudes Chapter 7. Affect. Cognition. Attitude. The Power of Attitudes. Attitude: A lasting, general evaluation of people (including oneself), objects, advertisements, or issues Anything toward which one has an attitude is called an object ( A o ).

Chapter 7. Attitudes - . definitions. “a general and enduring positive or negative feeling toward some person, object,

Consumer Attitude Formation and Change - . attitude. a learned predisposition to behave in a consistently favorable or

Chapter 7 - . attitudes. a lasting, general evaluation of people (including oneself), objects, advertisements, or issues.

Consumer Attitude Formation and Change - . issues in attitude formation. how attitudes are learned sources of influence