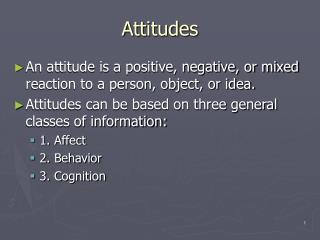 Attitudes. An attitude is a positive, negative, or mixed reaction to a person, object, or idea. Attitudes can be based on three general classes of information: 1. Affect 2. Behavior 3. Cognition. How are Attitudes Formed?. Learning

Attitudes - . attitudes are predispostions to act as an id, they affect behavior both directly and indirectly they help

Attitudes - . lecture contents. definitions and conceptualisations of attitudes. self-report measures. the theory of

ATTITUDES: FORMING AND CHANGING ATTITUDES - . attitude = altitude. what is your attitude toward drinking alcohol ?. happy

Attitudes - . from intentions to actions gabriela ilie, ph.d. university of toronto. attitudes vs. intentions. which

Attitudes - . the posture of one’s mind bears directly on his words and actions. a person’s outlook decides and

Attitudes 1 - . “did you ever have to make up your mind?” the lovin’ spoonful. attitudes i. what are attitudes? ii.