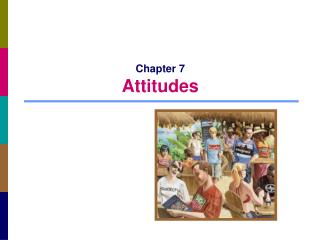 Chapter 7 Attitudes. The Power of Attitudes. Attitude: a lasting, general evaluation of people, objects, advertisements, or issues Attitude object ( A O ) Help to determine a number of preferences and actions. Functional Theory of Attitudes.

Chapter 7. Attitudes - . definitions. “a general and enduring positive or negative feeling toward some person, object,

Attitudes - . attitudes are predispostions to act as an id, they affect behavior both directly and indirectly they help

Chapter 4 ATTITUDES - . what is an attitude. attitude is an evaluation of people, ideas, issues, situations, or objects.

Attitudes - . the posture of one’s mind bears directly on his words and actions. a person’s outlook decides and