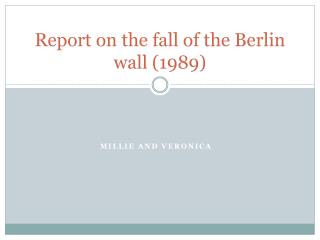 The Late Cold War and the Fall of Communism - . hwh unit 12 chapter 18.5. the end of détente . soviets invade

Berlin - . berlin. back as the capital of unified germany back as one of europe’s greatest – and most vibrant –

Berlin Wall - . 1961-1989. heading towards a wall. after wwii germany was split into two nations, east and west germany.

The Berlin Wall - By: andrew gawronski. the berlin wall. the creation of the

Live or die? A Report From Berlin on the Future of Arts Funding in Germany - Dr. beth bienvenu, mathilde speier, and