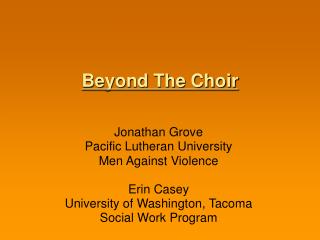 Into the Choir - Out of the mire. into the choir. “life is the pits?”. psalms

The School Choir - . the 50 children who make up the choir of our lady’s bishop eton school have recently taken part in

Jazz Choir - . tuesdays from 2:15 - 3:15. welcome back. congratulations on your entrance into the jazz choir. rehearsals

CHOIR VOCAB - . emphasis on a note or chord. pause. caesura. ending (the sign that indicates go to coda). coda. accent.

Choir robes - At choir on we have the best choir robes and accessories, you need to sing with style and comfort. we have

THE CHOIR TRAINING WORKSHOP - . worship and the worshipper praise and worship lead ministers -correct dynamics and

HONOR CHOIR - . 2012-2013. honor choir is a select group of students chosen through closed auditions. these auditions

Speech Choir - . -speech choir or choral speaking has a hallowed and proud tradition. -the first plays put on by greeks

Cathedral Choir - . every tuesday from 7:30 – 9:00 pm in the sanctuary. adult volunteer choir. no auditions required.