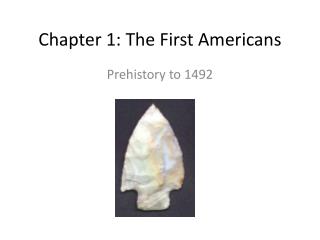 Chapter 1: The First Americans. Prehistory to 1492. I. Early Peoples. Where were the 1 st people migrating from?. They migrated from Asia to North, Central, & South America during the last Ice Age. How long did this take?. B. Centuries – people spread out across the CHAPTER 17 COUNSELING HISPANIC/LATINO AMERICANS - . hispanic. hispanic is the u.s. government designation to refer to the

Chapter 13 - . 41e - describe the growth of the western population and its impact on native americans with reference to

The impact of World War on Americans - . chapter 35. essential question. what kinds of opportunities and hardships did

The First Americans - . chapter 2, section 1. the first a mericans. left no written record scientists have evidence that