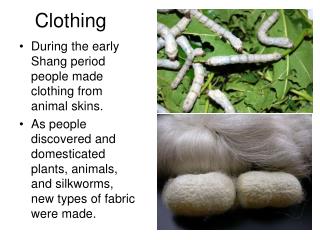 Clothing. During the early Shang period people made clothing from animal skins. As people discovered and domesticated plants, animals, and silkworms, new types of fabric were made. Clothing. Men and women both wore long belted tunics with jackets overtop.

Modesty In Attitude And Clothing - . unlike the world, christians’ clothing should reflect the attitudes of