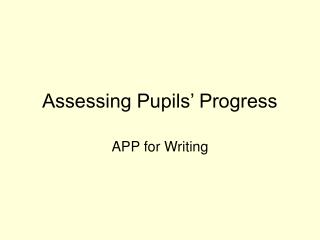 Assessing Pupils’ Progress. APP for Writing. APP – the benefits. APP is a structured approach to in-school assessment which: Enables teachers to make judgements about their pupils’ attainment, keyed into national standards. Assessing Pupil Progress - . moderating maths. objectives. to have the opportunity to assess a pupil’s nc attainment

Assessing Progress - . chapter fourteen. the quest to improve schools for all children. (c) 2006 the mcgraw-hill

Assessing Pupil Progress (APP) in mathematics - . aims:. to understand the structure and content of the app materials for

Assessing Students Progress in Book Club Plus - Things we think about. what is it that we want to assess?what are the

Assessing Your Progress - . organizing class materials. how do you know how you’re doing in your classes?. assessing

Disabled Pupils - . part of our school community. lucy uses her laptop to write while working with her friend. . anthony

10 pupils - There are 42 pupils in class 5/1. 10 pupils like ice cream and some pupils like chocolate. how many students