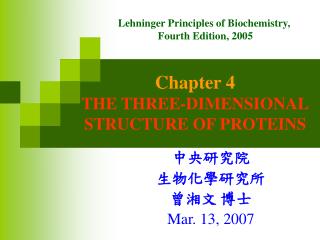 Chapter 4 THE THREE-DIMENSIONAL STRUCTURE OF PROTEINS Chapter 4 THE THREE-DIMENSIONAL STRUCTURE OF PROTEINS

What Are Proteins? - . proteins: large, complex molecules found in cells of all living things dictated by genetic