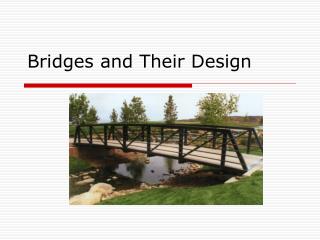 Bridges and Their Design Bridges and Their Design. History. Bridges have been used since the dawn of humankind Stone bridges became popular in the Roman era In the 19 th century, mathematics and physics became applied to design. What is a Girder Bridge?.

Bridges and Their Design

Balsa Wood Bridge - . 8 th. how does a bridge stay up?. bridges don ’ t always stay u p. forces act on a bridge

Bridge Building 101 - . presented by keen. day-to-day lives. engineering touches every aspect of our lives. roads you