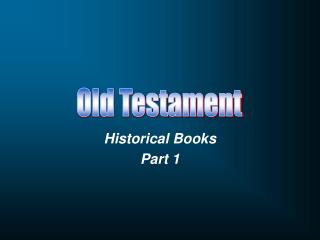 Historical Fiction Books - This is how the historical fiction books have been the part of human culture. this trend is

The Big Picture of the Bible part 1 - . assistance from the book written by kenneth w. craig.

PART I Historical Perspective and Current State Where have we been and what have we learned? - Differentiated

Historical Marker Instructions - . make sure you include the following; -name -dates -people/settlers -description of

The Books of 1 and 2 Samuel and 1 and 2 Kings - . the rise of the monarchy in ancient israel. the books of samuel.

Historical Fiction Book Report - . what is historical fiction. how to pick. think about a time in history or a historical

Handmade Books Parts of a book - . deckle : the rough, feathered edge of handmade

Historical Narratives and “Of Plymouth Plantation” by William Bradford - . historical narratives. if you wanted to

The Pentateuch - . 4 traditions of authorship. genesis 1-11. genesis was initially passed on through oral tradition .