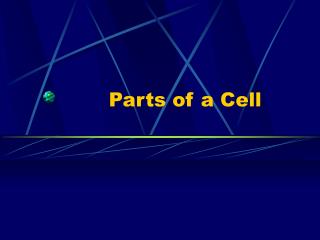 Parts of a Cell

Parts of a Cell. Cell Wall. Found only in plant cells Gives support to a cell Made of complex sugars called cellulose. Cell Membrane. All cells have a membrane Protective barrier that encloses a cell

Parts of a Cell

Parts of the Cell - . in the cell there are many organelles, or little organs. these carry out many of the life’s

What are cell parts and their functions? - . in this powerpoint you will learn the following: nine different cell parts

Parts of a Cell - . notes. common cell traits. a cell is the smallest unit that is capable of performing life functions.

Cell Parts - . a cell is like a human body because the both contain things that are vital to survival. a nucleus is like

Eukaryote Cell parts and analogies - . by: jonathan larson. nucleus . the nucleus is basically the brain of the entire

Parts of the cell - . chapter 7.3. prokaryotes (bacteria). nucleoid - control center that does not have a membrane around

Cells and Cell Organelles - . carry out all chemical activities needed to sustain life cells are the building blocks of

Parts of a Cell Review - . snc2d. question 3:. in plant cells, this part of the cell stores water causing the plant to