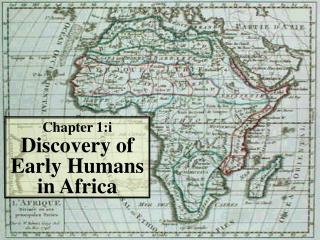 Chapter 1:i Discovery of Early Humans in Africa Chapter 1:i Discovery of Early Humans in Africa. History - the story of mankind - is divided into two time periods:. Circa 5,500 years ago. Pre-history. History. The period of history before people recorded events in writing.

Chapter 1:i Discovery of Early Humans in Africa

Geography and History - . ancient chapter 1, section 1. the iceman of the alps. in 1991, two hikers discovered the

Early Hominids - . what are hominids?. take your best guess! what do you think they looked like? could they help you save

The First Humans - . 65 million years ago. no matter what you may have seen in the movies, early man did not live during

Human Origins in Africa - . chapter 1 section 1. i scientists search for human origins. prehistory dates back to the time

The Neolithic Revolution and the Beginning of Civilization - . reminders. quiz is friday. prehistory . prehistory is the

Hunters and Gatherers - . chapter 2, lesson 1. objective. describe the way of life if the hunter-gatherer trace the