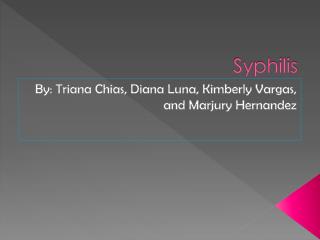 Syphilis. By: Triana Chias, Diana Luna, Kimberly Vargas, and Marjury Hernandez. About Syphilis. Syphilis is a sexually transmitted disease caused by bacteria that is passed sexually. Syphilis develops in four stages. Each stage has a different symptom. Syphilis Symptoms. Syphilis - . by: kim carbone period 4. what is syphilis?. is a sexually transmitted disease (std) caused by the bacterium

Syphilis - . done by: harpreet, manjot , syed &amp; sukhman. what is