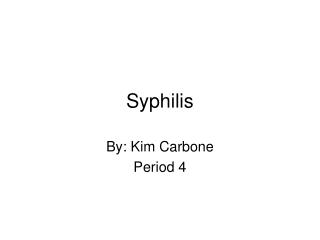 Syphilis. By: Kim Carbone Period 4. What is Syphilis?. is a sexually transmitted disease (STD) caused by the bacterium Treponema pallidum . It has often been called “the great imitator” because so many of the signs and symptoms are indistinguishable from those of other diseases. Syphilis - . done by: harpreet, manjot , syed &amp; sukhman. what is