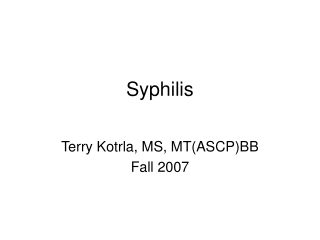 Syphilis! - . treponema pallidum. what is syphilis?. a sexually transmitted disease, living in the genital tract, and can

LABORATORY DIAGNOSIS OF SYPHILIS - . lab diagnosis is essential because of the asymptomatic phase in the disease. and

Syphilis Serology - . michael addidle. immigration medical on a 35 yr old tongan national who is pregnant and has history

Background - How community, corrections, neighboring jurisdictions, and surveillance worked together to contain an