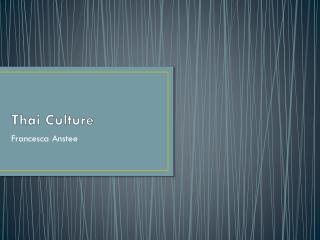 Thai Culture - . by: kelsey. the flag. the red represents the blood spilt to maintain thailand’s independence. the

Thai Amulets Charms Culture - Going through a rough time and feeling helpless? get thai amulets & charms from our

Thai Culture and the Culture of its Neighboring Countries - . unit 4. thai culture