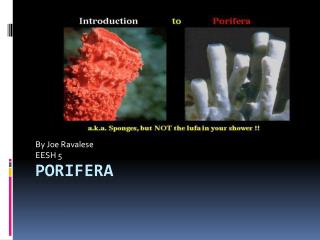 By Joe Ravalese EESH 5. Porifera. What are Porifera. Porifera often refered to as “Sponges” are a group of organisms under the Kingdom Animalia, and Phylum Porifera. What are the divisions of organization? - . kingdom. phylum. class. order. family. genus. species. animal phyla of the

Kingdom Animalia - . all animal phyla except phylum chordata (the chordates) 97% of animals are invertebrates.

Phylum Porifera - . the sponge. sponges are. simple, multi-cellular animal with pores asymmetrical, no organs or tissues