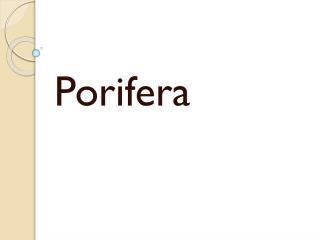 Porifera. The phylum Porifera (the sponges) includes about 5000 species almost all of which are marine (there are about 150 freshwater species, members of the family Spongillidae ). Porifera means “pore-bearing” and refers to the numerous pores and channels that permeate a sponge’s body. Porifera - By joe ravalese eesh 5. porifera. what are porifera. porifera often refered to as “sponges” are a group of

PORIFERA - . http://www.insidesocal.com/tv/612~spongebob-squarepants-posters.jpg. the best porifera of all! . period

Porifera - A.k.a. “pore bearers,” or sponges. by albert chen and anne ning. porifera.

Porifera - . the phylum porifera (the sponges) includes about 5000 species almost all of which are marine (there are

Phylum Porifera - . sponges. the first animals. sponges are animals and belong to the animal kingdom. characteristics: 1.

Phylum Porifera - . the sponge. sponges are. simple, multi-cellular animal with pores asymmetrical, no organs or tissues

Phylum Porifera - . questions. sponges are animals so what domain are they in? what kingdom?. what does porifera mean?.

Phylum Porifera - . finally, the first animal phylum!!!. what do you think of …. when you hear the word “sponge?”.