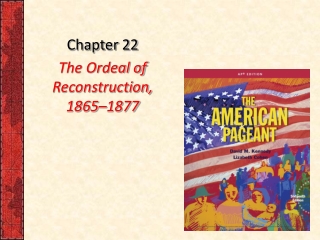 Chapter 22. The Ordeal of Reconstruction, 1865–1877. I. The Problems of Peace. Jefferson Davis: Temporarily clapped into irons during early days of two-year imprisonment He and fellow “ conspirators ” finally released All rebel leaders pardoned by President Andrew Johnson in 1868