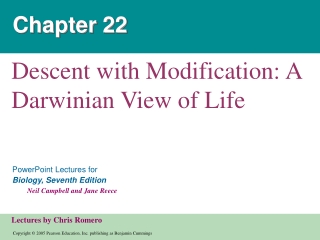 Chapter 22. Descent with Modification: A Darwinian View of Life. Overview: Darwin Introduces a Revolutionary Theory. A new era of biology began on November 24, 1859, the day Charles Darwin published On the Origin of Species by Means of Natural Selection