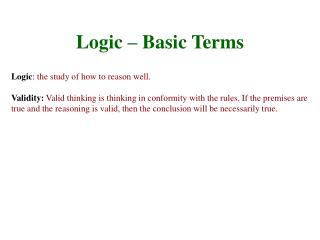 Logic – Basic Terms. Logic : the study of how to reason well. Validity: Valid thinking is thinking in conformity with the rules. If the premises are true and the reasoning is valid, then the conclusion will be necessarily true. .

Love is a Fallacy - Unit 5. love is a fallacy. max shulman. lecturer: meng fanyan. teaching objectives. to have a basic

THE PROGRAMMABLE LOGIC CONTROLLER - Slovak university of technology faculty of material science and technology in trnava.