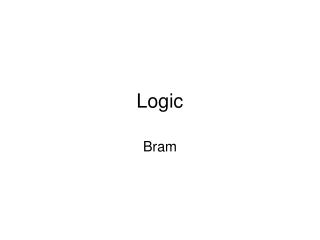 Logic. Bram. What is Logic?. What is logic?. Logic is the study of valid reasoning. That is, logic tries to establish criteria to decide whether some piece of reasoning is valid or invalid. OK, so then what do we mean by ‘valid reasoning’?. Reasoning. Logic - . knowledge-based agents. knowledge base (kb) = set of sentences in a formal language declarative approach to

Logic - Inductive and deductive reasoning. the two types of reasoning can be explained in a simple way. deductive

Logic - . propositional logic. logic as a knowledge representation language. a logic is a formal language, with precisely

LOGIC! - . how do we use logic to back up a claim?. discuss your assigned question. state your position on the issue as a

Logic - . lesson 3: practice with valid/invalid; more on inductive arguments. br: answer all the following on your own

Logic - . a statement is a sentence that is either true or false (its truth value ). logically speaking, a

Logic - . a conjecture is an educated guess that can be either true or false. a statement is a sentence that is either

LOGIC : - . syllogisms. syllogism: a set of statements called premises, which lead to one logical conclusion. if the

Logic - . introduction to logic. what is logic?. logic is the study of valid reasoning. that is, logic tries to establish