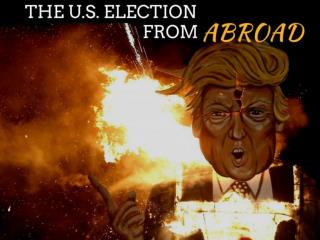 From burning effigies in Britain to burgers in Japan a look at how the world sees the U.S. presidential election. The First U. S. Constitution - . the articles of confederation. drafting the articles. first drafted by john dickinson,

The U. S. Constitution - . securing or betraying the revolution, 1787. conflict and compromise. virginia and new jersey

Humor and Names in the 2008 U. S. Presidential Election - . by alleen pace nilsen. because presidential campaigns go on

The U. S. Constitution - . chapter 3. section 3.1 basic principles. objectives: by the end of this lesson, you will be

The Election - . main points from article “the election,” by bobby witherington. introduction . the presidential

The U. S. Constitution - . http :// www.usconstitution.net/constkids.html. the basics. the constitution is the highest

The U S A - . america is named after the italian navigator amerigo vespucci. he made several voyages to the new world.

S ELECTION M ETHODOLOGY - . what is a talent architect?. answer: someone who a ttracts, develops, and retains talent.