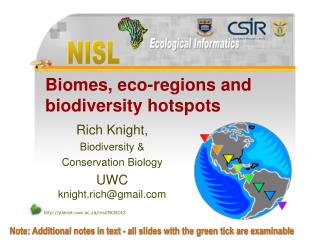 Ch 11 - Biodiversity and Conservation Biology: - . biodiversity. growing human population and resource use is

BIODIVERSITY AND CHANGE What is biodiversity? - Why is it important in tropical rainforests? in what ways? how and why

Why study biodiversity, ecology, and conservation biology? What is biodiversity - How do biologists organize

Ch 6 BIOMES - . ch 6-1 what is a biome?. biome: similar ecosystems found throughout the world. large region with a

Biodiversity - . ch10, section 2: biodiversity at risk standards: sev1a, 1d, 1e. what is the difference between