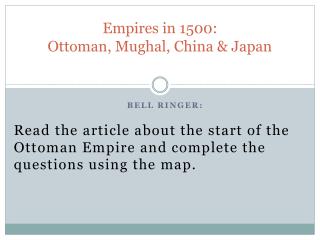 Empires in 1500: Ottoman, Mughal, China & Japan. BELL RINGER: Read the article about the start of the Ottoman Empire and complete the questions using the map. Today in class …. We will…. Take an open note quiz on the major world religions.