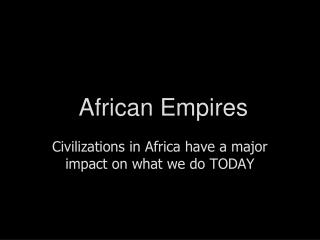 African Empires. Civilizations in Africa have a major impact on what we do TODAY. ??????. What is the connection between what happened in ancient African times to the way we live in America TODAY?. FOLLOW ALONG…. AFRICAN EMPIRES - . an exchange of goods and culture. ghaha empire. in west africa the kingdom of ghana had some of the

African Trade Empires - . ch. 13 sections 2 &amp; 3. ghana. the empire of ghana was in west africa between the

West African Empires - . the empire of ghana 750-1076. political: led by powerful king who ruled over a splendid

African Empires and Culture - . art. from the royal masks of the benin people to the monster masks of other tribes,

African Cultures and Empires - . first humans. fossils from the first known humans were found in africa believed to have

Character of African Empires: Songhay - . knowledge of major empires and other political units and social systems