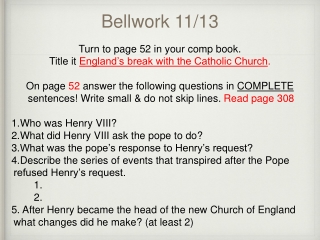 Bellwork 11/13. Turn to page 52 in your comp book. Title it England’s break with the Catholic Church . On page 52 answer the following questions in COMPLETE sentences! Write small & do not skip lines. Read page 308 Who was Henry VIII? What did Henry VIII ask the pope to do?