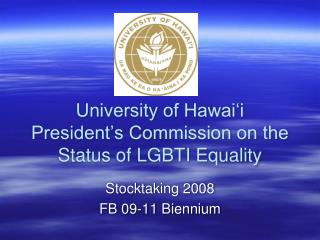 CIVIL RIGHTS - . equality under the law?. concepts of equality. equality of opportunity people should have an equal

University of Hawai’i - . year-end and other issues. presented by financial management office may 17, 2006. order of

Community Profile: Tulsa County - . focus on women. prepared by the community service council, with support from the

Welcome to The Plan Commission and BZA - . quarterly land use update january 23, 2008. purdue university is an equal