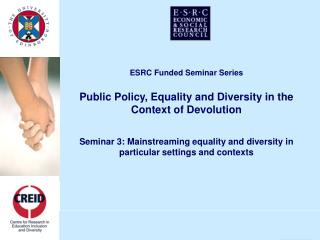 ESRC Funded Seminar Series Public Policy, Equality and Diversity in the Context of Devolution Seminar 3: Mainstreaming equality and diversity in particular settings and contexts. WELCOME & INTRODUCTION. The challenges of multi-culturalism in the UK Peter Tatchell.

Entrepreneurship and Tax Policy - . richard kneller university of nottingham. financial support from the esrc under

Introduction to Equality &amp; Diversity - . 1. what are equalities. equalities can be described as all the work

Forces of Devolution - . the basque separatist movement. devolutionary geographies. devolution is a process that involves

PPA 503 – The Public Policy-Making Process - . lecture 3a – official and unofficial actors and their roles in public