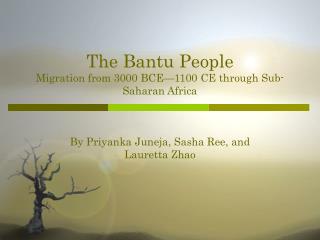 Early Africa - . a wh1 presentation by mr. hess. part i: northeast africa – nubia, kush and axum. nubia. the kingdom of

EARLY EAST AFRICA - . the historiography. the question of sources the coast – abundance of written sources the interior

a. Identify the Bantu migration patterns and contribution to settled agriculture. - Sswh6 the student will describe the

Trading States and Kingdoms East and West Africa - . how will trade influence the history and culture of the african

The Kingdoms of West Africa - . the rise of ghana. desert travel. goods for gold. ghana had many resources, but location

Heritage of Africa - . what to look for in the chapter . in parts of africa, trade helped to support large states and

Kingdoms and states of Africa - . chapter 7, section 2. ghana, mali, and songhai. the expansion of trade led to migration

Sub Saharan Africa 3 rd Quarter Assessment Study Guide - . 1. in what hemisphere is most of africa located?. most of

The Bantu Migration - . create a diagram like this one on your paper. . bantu migration. evidence . . . theories for

There were linguistic, mutually intelligible ties via Bantu . - What african political and social institutions predate