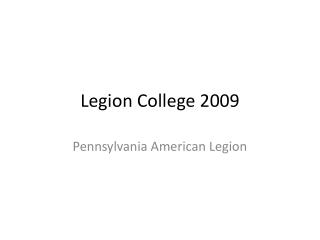 Legion College 2009. Pennsylvania American Legion. “to foster and perpetuate a 100% AMERICANISM”. Americanism is love of America; loyalty to her institutions as the best yet devised by man to secure life, liberty, individual dignity and happiness; and the willingness to defend our

Introduction - . chapter introduction. this chapter will introduce you to the roman republic . you will learn about the

American Legion Child Welfare Foundation - . “dedicated to the betterment of all children.”. what people are

Iowa - . by i saac g uyton. picture of the state. picture of state flag. state motto and nickname. our liberties we prize

THE AMERICAN LEGION - . a look into the past the national organization and the department of texas. the national

TOPIC: POLITICS AND ECONOMICS AT THE END OF THE TWENTIETH CENTURY - . chapters 39-40 in book. the election of 1968 and

Bono, lead singer of U2 and humanitarian - . by emma. quick facts about bono. full name: paul david hewson aka bono