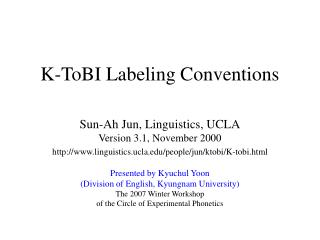 PHONETICS - . what is phonetics?. it’s a discipline in linguistics which deals with the transcription of sounds. the

Conventions of Gothic Literature - . something wicked this way comes by: ray bradbury. gothic literature tends to have

Legal and Institutional Prescriptions for the implementation of the 3 Rio Conventions - . annie roncerel senior

SPICE Conventions - . a summary of many “standards,” lingo and common usage within spice october 2007. the name of

Conventions of Literary Analysis - . what to do (and what not to do) on your analytical essay. quote integration.

Media conventions: Narrative - . definitions – plot vs. narrative. plot : the sequence of incidents or events that

Line Conventions - Line conventions convey information as succinctly as a physical example of the object itself.the

Phonetics - . october 8, 2010. housekeeping. morphology homeworks are due! also: i will be gone next week… danica will