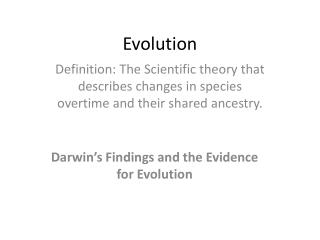 Definition: The Scientific theory that describes changes in species overtime and their shared ancestry. Evolution. Darwin’s Findings and the Evidence for Evolution. Darwin’s Voyage. Darwin was apart of a mission that was commissioned to survey and map the coastal waters of South America