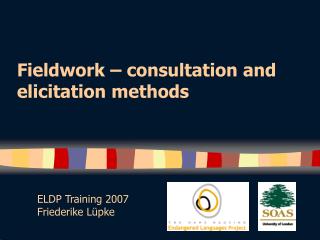 Fieldwork – consultation and elicitation methods. ELDP Training 2007 Friederike Lüpke. Structure of the talk. Motivation for methodological considerations in the field of language documentation Overview of Himmelmann’s types of communicative events What is research methods? - Reviewing the ads what sorts of methods are used in the advertisements? which of these is

Qualitative Methods - . chapter topics. the nature of qualitative methods the qualitative research process the range of