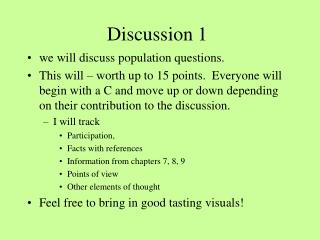 Discussion 1. we will discuss population questions. This will – worth up to 15 points. Everyone will begin with a C and move up or down depending on their contribution to the discussion. I will track Participation, Facts with references Information from chapters 7, 8, 9

IT 235 In order to succeed, you must read/Uophelpdotcom - For more course tutorials visit www.uophelp.com it 235 week 1 A discussion of the use of reforecasts - Prepared for 2006 ncep predictability meeting, 14 nov 2006. noaa earth system