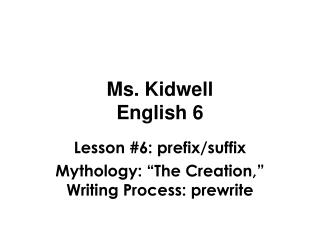 Ms. Kidwell English 6. Lesson #6: prefix/suffix Mythology: “The Creation,” Writing Process: prewrite. Prefixes &. Suffixes. Warm Up :. Unfinished Write the prefix and suffix Write the root word Write the definition using the root Use the word in a sentence Make a new word with the root.

Valve Train (Camshaft, Rocker arm, Pushrods) By: Hewett Sze - . objective: to give an overview of how these components

Root Word: pel , puls = drive, driven, force - . c ompel (v) to force someone to do something; to drive someone into

a study in the book of Ephesians - . this week: chapter 6. the armor of

Fables - . the basic definition. a short tale used to teach a moral lesson, often with animals as characters. purpose. to

Phaedrus’ Fables - . vocab list. phaedrus’ fables. a fable is a story in which animals speak and act like human