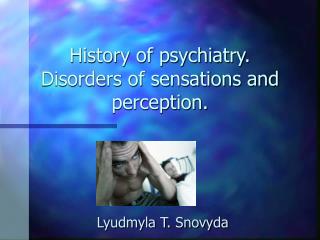 History of psychiatry. Disorders of sensations and perception.

History of psychiatry. Disorders of sensations and perception. Lyudmyla T. Snovyda. "A psychiatrist is a fellow who asks you a lot of expensive questions your wife asks for nothing" - Joey Adams. Psychiatry -.

History of psychiatry. Disorders of sensations and perception.

PERCEPTION Aparna Goyal - . perception how we see the world in and around us. perception. amity business school. consumer

The History of the World Psychiatric Association - . vera and norman sartorius. geneva. the origins. positive experience

Inhaling: perception - . by: cara giovinazzo. what is perception?. defined as a social and cognitive process in which

Week 2: History of The System and Its Perception of the Family - . psrt 4271: the family role in rehabilitation.

Sensation and Perception - . introduction. what is a sensation?. usually refers to the physical stimulus in the

The social causes of human distress: Implications for how to respond Professor John Read - Scientific symposium 15th of