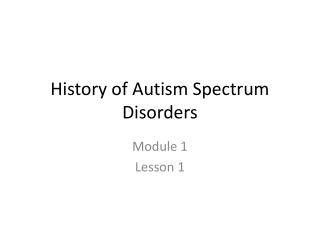 History of Autism Spectrum Disorders. Module 1 Lesson 1. The first use of the word autism. The word autism comes from the Greek word autos meaning self.

Students with Autism Spectrum Disorders - . chapter 11. what is the history of autism spectrum disorders?. autism was

Autism - . definition. a neurodevelopmental disorder that affects the way a person communicates and relates to people