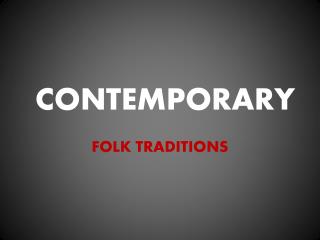 CONTEMPORARY. FOLK TRADITIONS. The cinema in the Rhône-Alpes region. The cinematograph was born in 1895. It was invented by the Lumière brothers . Their first main public screening of films was held on December 28, 1895, at Salon indien du Grand Café in Paris. Contemporary Christian Praise and Worship 10:00am - . alas! and did my savior bleed and did my sovereign die?. would he

Art with a Twist - . campello on contemporary. or what this really will be…. who is this campello guy anyway? a quick

Contemporary Baking - . basic ingredients. baking, unlike cooking, leaves little room for error – if a recipe is not

LinCS - The linnaeus centre for research on learning, interaction, and mediated communication in contemporary society.

Contemporary Crafts - . the silhouette. silhouette the black outline of a person, usually the head and face, that shows