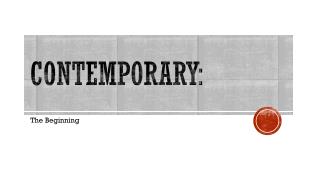 Contemporary:. The Beginning . Isadora Duncan . born in 1877, first self trained in classical ballet and burlesque (skirt dancing) Duncans' new vision for dance was not accepted in the U.S so she  took her vision to Europe where they appreciated the change. Contemporary Christian Praise and Worship 10:00am - . come let us worship and bow down. let us kneel before the lord our