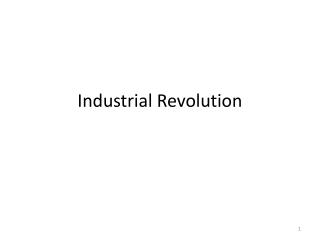 Industrial Revolution. 7-3 Explain how the Industrial Revolution caused economic, cultural, and political changes around the world. Objective: identify why England was the ideal place to start factories and explain why it started in England. What is it?.

What innovation drove the industrial revolution in the 1800’s? - . the steam engine. a steam engine is an example of a

The Russian Revolution - . “i shall maintain the principle of autocracy just as firmly and unflinchingly as it was

Industrialization and Nationalism - . chapter 10 lesson 1. objective. to understand the causes of the industrial