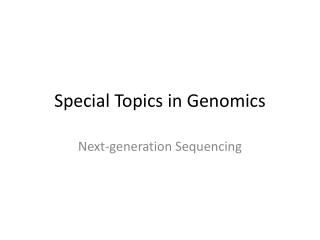 Genomics and You - . “what is it and why now?”. overview. genetics vs. genomics misperceptions applicability to

Planning experiments in genomics and transcriptomics - . daniel hurley. introduction: some general thoughts. here we will

Functional Genomics – Why? - . you can’t learn everything from dna sequence levels of organization contain different