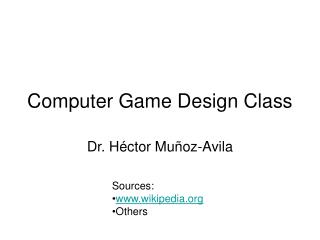 Video Game Design Camp for Teens - Turn your love of video games into a dynamic profession by joining our design camps.

Game Programming 101 - . john see. agenda. games: why are you doing this?!? the game industry once upon a time… what

Designing Games for Game Designers - Note : turn on “notes view” to see the outline of the talking points. several

What Do You Think Goes Into Developing Games? - . consider a computer game you want to build (or, one you like that has