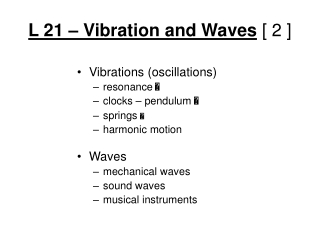 VIBRATION AND WAVES Sound and Light - . pendulum. pendulum’s period:. the time required for one complete vibration, for

WAVES - . types of waves and their properties. questions of the week. what is a wave? what kinds of waves are there?.

Waves and Sound - . honors physics. what is a wave. a wave is a vibration or disturbance in space. a medium is the